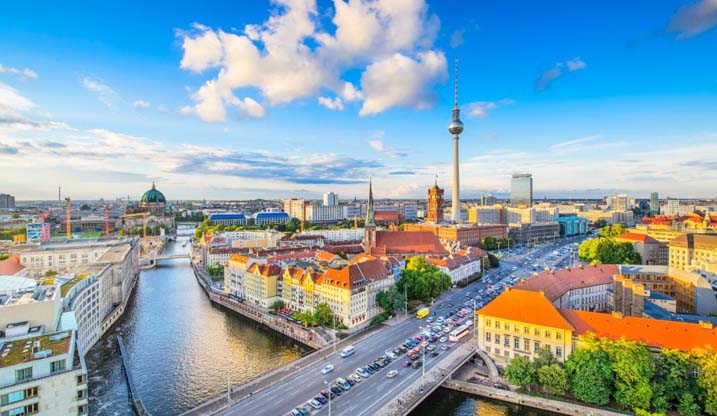 Now that reality has finally set in and we realise that the Irish summer is no different to its winter, we start refreshing the Ryanair homepage to try and plan a trip to the sun, and what better reason to than for a hen party weekend. We at the Foxy Hen have rounded up our top 5 favourite European hen party destinations, that will give you just the right amount of culture as well as crazy for a hen weekend you won’t forget.

If you’re Hungary for Eastern Europe, then Budapest, has to be on your list of foreign hen party destinations. Home to the century old thermal baths and spas, the city is a no-brainer when it comes to creativity and culture, not to mind the craic. This location has been nicknamed as the “Paris of the East”, so will undoubtedly show you and your hen party a good time, Hungarian style.

Why not take a river cruise down the Danube or a segway tour around the city’s historical monuments and parliament buildings? If you’re in a more “treat yoself” kind of mood, why not head to the Szechenyi thermal baths for a pamper session to prep for the big night out.

In terms of nightlife, Budapest oozes choice, from trendy ruin bars, to boat parties and outdoor clubs. If you just can’t get enough of its 30ºC baths, why not hit up a bath party, where the thermal baths transform into a lit up pumping party of steam and swimsuits. Budapest guarantees both culture and craic, so you’d be cuckoo not to choose it for your hen party.

Ready to cut loose in Latvia? This Baltic destination is becoming the hottest Eastern European hen party destination, and we know why. Its renowned bar scene and cheap drink prices mean that you and the flock can party til dawn at a reasonable cost.

Take a stroll the morning after the night before around its historical centre, which is also a UNESCO World Heritage Site. For those who wish to clear the hangover with some water based activities, we have offers including water rafting and canoeing, or quad biking and clay pigeon shooting for those who prefer to stay on the ground. If your head is still in the clouds from the night before, why not look into our bungee jumping offer to get some spectacular views of the Latvian capital.

For nightlife, look no further than the range of bars and night clubs that stay open til the early hours. Sample traditional Latvian beer paddles, book a table at one of Riga’s cabaret shows or come back to life at its electric ballroom. Riga has it all in terms of adventure and alcohol, so it will definitely make your hen party one that the flock will never forget (or remember!).

This Dutch destination is so much more than just its red light district and coffee shops. With its laid back and friendly atmosphere, Amsterdam is the perfectly hip spot for your hen party.

Take a stroll through its narrow streets, or hop on a river cruise along its canals to soak up the neatly packed terraced buildings of the city. Wander on over to the iAmsterdam sign for a selfie in Vondelpark, or get your culture fix at the Van Gogh museum or the Anne Frank house. For those who prefer to get straight on it, book a trip to the Heineken Brewery as part of your package with us.

Once it gets dark, we have a huge selection of activities to make sure you have a dam(n) good time. Your hens are going to want to check out the famous red light district at some point, and with the Foxy Hen, we can cater to a lot of personal and erm, provocative hen party activities. Think a red light pub­crawl, a Prosecco bike tour, a wine matching workshop, or even an ice bar.

So head on over to our easy to use destinations page and book your Amsterdam package, it’s not double dutch!

You’d be foolish not to czech out this Republic’s capital for your hen party, where its drink prices are as low as the chilly temperatures of its ice bar.

Step into its fairytale-like streets and take in the magic of this medieval city, which is home to the largest castle in the world to ensure the main hen feels like the queen she is. Hop on a river cruise down the Vltava and under the well known Charles Bridge, before taking in the numerous museums around the city.

With the average cost of a pint equating to €1.40, Prague is a no brainer for cheap and very cheerful nightlife for your hen party. On top of this, the city is home to the largest nightclub in Europe, consisting of 5 floors, each featuring different styles of music. Alternatively, hop from bar to bar on one of our pub crawls, or for a medieval gastronomic experience why not try our medieval banquet!

So grab the birds and make sure you head to the heart of Europe for your hen party.

They say to save the best ‘til last, and with Berlin it’s no different. The German capital will provide you with an action packed hen party, from historic monuments to an unbeatable thumping techno party scene to carry you into the early hours of the morning.

Make sure to pack your comfortable shoes, as our sightseeing tour will lead you around its iconic landmarks from the Second World War, while stopping off for some currywurst to help cure your hangover after the tasty German beer. If you want to get away from the city, check out our wakeboarding and paint balling options to add some extra colour to the weekend before the big night out.

Berlin is known to have the best clubbing scene in Europe, and what better way to celebrate your hen party than at one of its well known clubs such as Watergate or Tresor. If you really want to experience the city from a local’s perspective, check out the hipster bar scene as part of our Berlin night option. You can also choose from a traditional Bavarian feast option if you would prefer to sample the local cuisine.

Berlin is a catch all kind of city, one that oozes both culture and clubbing, so get booking and get ready to fly the coop!

Trust us, these trade secrets can save you hundreds!